Our Jurupa Valley Plumbers can handle any and all Plumbing, Sewer, or Drain Cleaning Issues

On time and On Budget! There are No Problems - ONLY SOLUTIONS!

﻿We will fix it right the first time!

With the most comprehensive service warranties in the industry.

Call us and "Consider It Done" 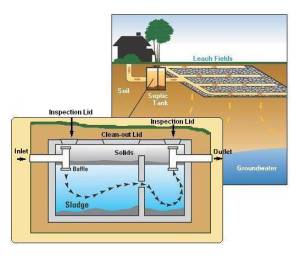 A Septic Tank is a key component of the Septic System, a small-scale sewage treatment system common in areas with no connection to main sewage pipes provided by local governments or private corporations.

Septic systems are a type of Private Sewage Facility. In North America, approximately 25% of the population relies on septic tanks; this can include suburbs and small towns as well as rural areas.

The term "septic" refers to the anaerobic bacterial environment that develops in the tank which decomposes or mineralizes the waste discharged into the tank. Septic tanks can be coupled with other onsite wastewater treatment units such as biofilters or aerobic systems involving artificial forced aeration.

Periodic preventive maintenance is required to remove the irreducible solids that settle and gradually fill the tank, reducing its efficiency. In most jurisdictions this maintenance is required by law, yet often not enforced. According to the Environmental Protection Agency, in the United States it is the home owner's responsibility to maintain their septic system.Those who disregard the requirement will eventually be faced with extremely costly repairs when solids escape the tank and destroy the clarified liquid effluent disposal means. A properly maintained system, on the other hand, can last for decades or possibly even a lifetime.

Flushing non-biodegradable items such as cigarette butts and hygiene products such as sanitary napkins, tampons, and cotton buds/swabs will rapidly fill or clog a septic tank; these materials should not be disposed of in this way. Its best to dispose of these items into the trash can.

The use of garbage disposals for disposal of waste food can cause a rapid overload of the system and early failure. Garbage Disposals are rapidly being frowned upon due to their misleading nomenclature. The presumption is that a Garbage Disposal is intended to dispose of food waste and scraps. When in fact it is to be used sparingly for what may happen to get into your drain while washing and rinsing the dishes. Intentionally disposing of left overs and food preparation scraps into the garbage disposal will most certainly lead to drain back ups; over time it will indeed damage your septic system.

Certain chemicals may damage the components of a septic tank, especially pesticides, herbicides, materials with high concentrations of bleach or caustic soda (lye) or any other inorganic materials such as paints or solvents. Never dispose chemicals into your drain system.
Other chemicals can destroy septic bacteria itself, most notably silver nitrate even in very small quantities will kill an entire culture.

Roots from trees and shrubbery growing above the tank or the drainfield may clog and/or rupture them.

The flushing of salted water into the septic system can lead to Sodium Binding in the drainfield. The clay and fine silt particles bind together and effectively water-proof the leach field, rendering it ineffective.

Excessive water entering the system will overload it and cause it to fail. Checking for plumbing leaks and practicing water conservation will help the system's operation. Never ignore a leaking toilet or faucet as the water will place and undue burden onto your Septic System

Very high rainfall, rapid snow-melt, and flooding from rivers or the sea can all prevent a drain field from operating and can cause flow to back up and stop the normal operation of the tank. High winter water tables can also result in groundwater flowing back into the septic tank.

Over time, biofilms develop on the pipes of the drainage field, which can lead to blockage. Such a failure can be referred to as "biomat failure" 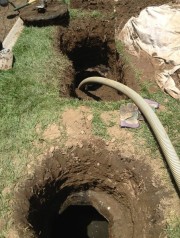 Septic Pumping Service - Far too often customers are led to believe that their septic tank was pumped properly by way of (1) chamber (the solid side). In order to properly service a septic tank both chambers (the solid and liquid sides of the tank) must be exposed and pumped of all contents. The main objective of the service is to help prevent solid waste from entering the liquid side, and ultimately the disposal leach field, cesspool, or seepage pit. What causes a septic system to fail? Solids - Solids that have passed through the liquid side is the #1 culprit

3. Visual Inspection of the Septic Tank for contents, cracks, deterioation.

4. Septic Pumping of all contents within BOTH sides of the Septic Tank

5. Visual inspection of the inlet and outlet baffle tees

6. Inspection and Cleaning of the drain and sewer lines served by the Septic Tank. To ensure the system is draining properly and hasn't been affected by built up sludge or waste paper.

A more thorough and the recommended Septic System Service in Jurupa Valley, California includes the inspection of the following:

1. A sewer camera inspection of the outlet line to determine the pipe condition

2. Location and Inspection of the distribution box

Check out AAP All American Plumbing on Yelp